Partner
“Our experience, expertise and improvements in the efficiency of our solar power plant operations has generated double-digit growth over consecutive years. We’re proud of the fact that the profits from our photovoltaic power plants remain in the Czech Republic, where we reinvest them into other projects.” 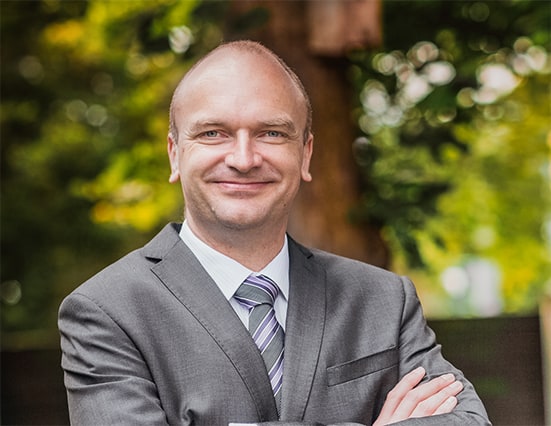 Jiří Fast vystudoval softwarové inženýrství na ZápJiří Fast graduated in software engineering from the University of West Bohemia in Plzeň and also took up placements at universities in Zwickau, Germany and Berne, Switzerland. He has been amassing business experience since the age of eighteen, when he first began trading on foreign markets in China, Korea, Taiwan and Hong Kong.

Initially working in agriculture and construction, Jiří Fast began to move into solar energy. In 2007, he set up his own trial photovoltaic power plant on his industrial premises in Plzeň. In 2009, he designed another solar power facility with a capacity of 700 kW. This successful project was followed by the construction of a solar park with a capacity of 989 kW.

Today, he is one of the renewable energy sector’s most experienced investors. Together with Jan Chrenko, he has purchased 23 power stations with a total capacity of 67 MW over the last 6 years. Jiří’s role within JUFA Investment Group is to concentrate on the operations of the photovoltaic power plants (current total capacity of 82 MW) and to continue their technical and financial optimisation.

Due to his wealth of experience in photovoltaics and in Czech and EU legislation regulating the operation of renewable resources, Jiří Fast has become a respected figure in the solar energy sector. Since 2012, he has been a prominent member on the board of the largest Czech industry association for photovoltaic power plant operators – Solární asociace (formerly known as the Czech Photovoltaic Industry Association, or CZEPHO). Within the organisation he is responsible for legal affairs, while also chairing several working groups dealing with current questions concerning the running of photovoltaic power plants.

We have started investing in VR/AR startups and we would like to present you our new division JUFA VR which is full of immersive projects.